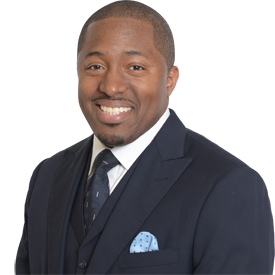 The Reverend Dr. George Lewis Parks, Jr. was born April 20th in Nashville, Tennessee to Rev. George L. Parks, Sr. and Sis Kay Ramona Parks. He and his family relocated to Dayton, Ohio and later moved to Cleveland, Ohio. Dr. Parks graduated from Lutheran High School-East in Cleveland, OH, where he served as the Senior Class President. He went on to pursue his undergraduate studies at the American Baptist College in Nashville, TN where he was awarded the MLK Scholarship and earned a Bachelor of Arts in Biblical Studies/Pastoral Studies.

Dr. Parks’ thirst for spiritual growth led him to return to school and he earned his Masters of Divinity degree from Howard University School of Divinity in Washington, DC. There, he was awarded the prestigious J. H. Jackson Award for Promise in Pastoral Excellence. His sermon, “Black and Proud” has been published in the African American Pulpit journal.

In May 2016, he earned his Doctor of Ministry in Expository Preaching from Union University School of Theology and Missions.

Dr. Parks’ spiritual journey began under the tutelage of his father who served as Pastor of the New Pilgrim Baptist Church in Dayton, OH where he confessed his hope in Christ. He accepted his call to proclaim the Word of God on January 25, 1998 and preached his initial sermon on March 22, 1998 in Cleveland, OH at the Sacrificial Baptist Church where his father presently serves as Pastor.

God has given Dr. Parks a diversity of assignments throughout his ministerial career. In Nashville he joined Watson Grove Baptist Church under the leadership of Rev. Curtis W. Goodwin, Sr. While at Watson Grove, he was an Associate Minister and the Youth Director. In Washington, D.C., he united with Meridian Hill Baptist Church. There, he was ordained on November 25, 2007 under the leadership of Pastor Calvin E. Cage, Sr. He later served as an Assistant Pastor.

God has shown His favor and anointing on Dr. Parks by allowing him to preach God’s word throughout the country, and by placing kind-hearted Pastors in his path. In return, Dr. Parks opens doors for other ministers, including his younger brother Jeremiah.

Following God’s voice, Dr. Parks accepted the call to become the seventeenth Pastor of Riverside Missionary Baptist Church in October 2008. He preached his first sermon as Pastor of the church on Sunday November 16, 2008. He completed his Pastoral assignment to this body in March 2015 as God reassigned him to serve as the Senior Pastor of New Hope Baptist Church in Arkansas with campuses in North Little Rock and Conway. He preached his first sermon on Sunday, March 29, 2015.

Dr. Parks continues to build on the Legacy and Vision of the New Hope Baptist Church and our future continues to shine as the church moves into a new season of Building Faith and Sharing Love. Dr. Parks is married to the former Joy Marie Dailey. He is the proud father of George L. Parks, III (“Trey”), Genesis, and twins, Gabriel and Grayson.